On the Simulation of Offshore Oil Facilities at the System Level

Offshore oil facilities are complex systems that involve elaborate physics combined with stochastic aspects related, for instance, to failure risk or price variation. Or there is still no tool that combines physical (mostly engineering fluid mechanics) and risk simulation. Such a tool could be useful to engineers or decision makers for specification, design and study of offshore oil facilities.

We present a first step towards the creation of such a tool. Our current simulator is based on new Modelica components to simulate fluid flows and on stochastic simulation at a higher level, for modeling risk and costs. Modelica components implement physical models for single and two-phase flows in some typical devices of an offshore field. The risk simulation uses Markov chains and statistical indicators to assess performance and resilience of the system over several months or years of operation. 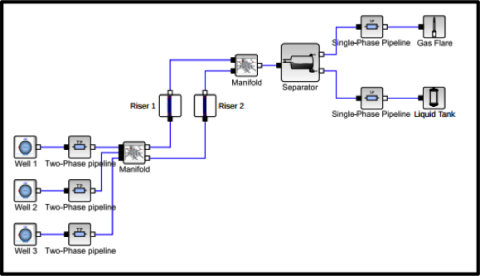 The presented simulation framework can be used to compare different designs of an offshore oil facility, in order to choose the most productive and/or robust, depending on the choice of a performance evaluator. As a proof of concept demonstrating the capabilities of the FastProof tool, the operating states and their occurring probabilities were defined arbitrarily. In further steps, they have to be set from technical data and part of the complexity of failure dependencies has to be handled automatically.