Satellite orbit around the earth

The CNES has been a great user of Scilab, and a long-term partner of us. Upon their advice, we presented one of their use case at the the 6th International Conference on Astrodynamics Tools and Techniques (ICATT).

The question is a classical problem of space mechanics solved step-by-step, to demonstrate the capacities of Scilab in this field:

The problem is based on the universal law of gravitation:

We write down Newton’s second law of motion in an earth-centred referential: 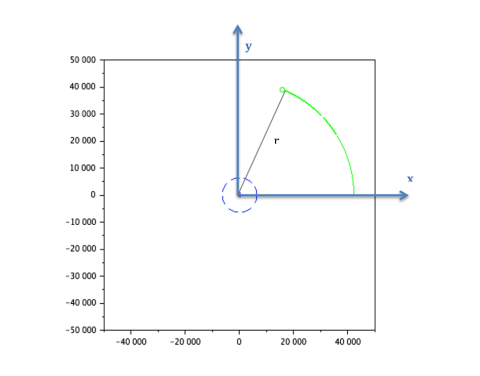 Position of the satellite is at a distance r [x; y]

Mass of the earth:

Radius of the Earth:

Scilab is a matrix-based language. Instead of expressing the system as set of 4 independent equations (along the x and y axis, for position and speed), we describe it as a single matrix equation, of dimension 4×4:

To simplify the equation, we define the variable:

Define the skeleton of the function:

The condition defined by the distance r of the satellite with the centre of earth stops the simulation if it’s colliding with earth’s surface.

Try out the final script with the following initial conditions in speed and altitude:

3.   Compute the results and create a visual animation

With this function, we go to the core of the problem:

The resolution of the ordinary differential equation (ODE) is computed with the Scilab function ode.

where y is a real vector or matrix

To go further in numerical analysis, find out more about the solvers: 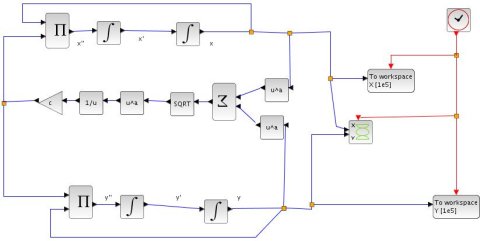