This use case was provided by our partner Bertin, within the R&D collaborative project Mecasif.

In order to maximize the energy production of vertical wind turbines, a wind turbine energy exploitation company needed to design an optimal wind farm. Simulation has proven to be useful in such cases. However, considering the size of the problem (an entire wind farm), the simulation had to be thought differently.

Actually, one option could be to model the complete field with 10 wind turbines and simulate the complete field with a traditional Computational Fluid Dynamics (CFD) simulation. But such approaches tend to be time demanding & costly in terms of computing resources, especially if the simulation need to describe an entire parameter space (e.g. varying rotation speed) as part of an optimization process.

In order to reduce the problem complexity, our partner decided to make use of model reduction. The idea is to get a lighter elementary model of the flow around one single wind turbine, whatever the parameter value is, based on a relevant Design of Experiment (DoE).

The reduced model implemented in Scilab based on those FEM simulations is then divided in three parts : 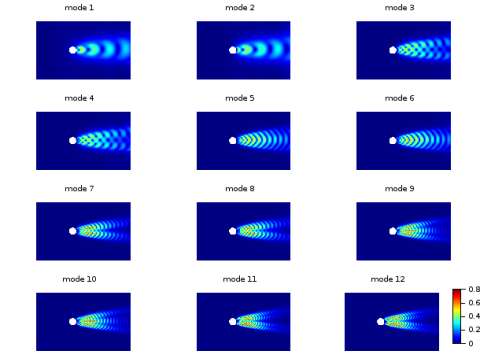 Based on this tool, our partner is now able to fast model the flow around the cylinder based on empirical data but also to make prediction on the flow behavior for a non simulated cylinder rotation speed case. Moreover, the time of simulation of the flow around a single wind turbine was reduced, from several hours of FEM computing on a cluster, to a Scilab reduced model providing results on a regular PC station within seconds.

This technological lock being unleashed enabled running the complete model of the field composed of several reduced models on different configuration of wind turbine positions, thus finding an optimal.

This benefits of model reduction methods can be leverage in other field on similar optimization problems, running several simulation of a reduced model instead of complete costly FEM simulation.

You too, you have time-demanding and costly FEM models? We can provide you a reduced model!