These PI controllers are often provided in an analog implementation in order to not introduce delays in system response, but usually they cannot be easily tuned on the considered system, and obtained control performances do not reflect nominal features.

Due to the PAs linear behavior, the pre-compensated plant is identified by input/output data acquired with the MicroDAQ (with a sample time of 20 kHz) in the form of a Linear Time-Invariant (LTI) system. A Linear Quadratic Gaussian (LQG) controller, including a Kalman Filter (KF) for the estimation of the identified system state, has been developed and tested in the Xcos simulation environments. Thanks to the flexibility of MicroDAQ toolbox in easy integration of custom C/C++ code, the proposed controller has been compiled and imported into the MicroDAQ for real-time tests on the PA.

Through the real-time implementation pre-compensated system performances have been improved. Experiments consider step response tests and the results present the reduction of the Integral Square Error (-60%), the rise time (-25%) and the settling time (-29%). 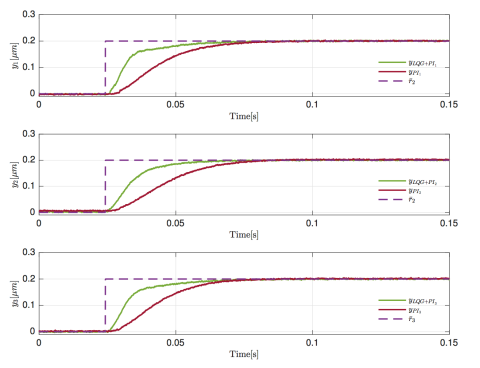