This article is kindly shared by Jen-Jen Manuel

Below is an example of an artificial neuron modeled by McCulloch and Pitts in 1943. A neuron receives weighted inputs wixi  (where i = 1, 2, 3 for the example shown below) from other neurons. These weighted inputs are then added to yield a and then acts on an activation function g. The output z is then fired to other neurons.

We are to utilize the ANN toolbox in object classification. There are two classes of objects, Aand B, to be classified based on two features extracted. The code used is shown below. Take note that the input training matrix x consists of 12 rows with 2 columns since there are 12 objects to be classified based on 2 features. The desired output t represents the class of the object classified such that a value equal to 1 means class A and a value equal to 0 means class B. Take note that the values for both sets of features are normalized. 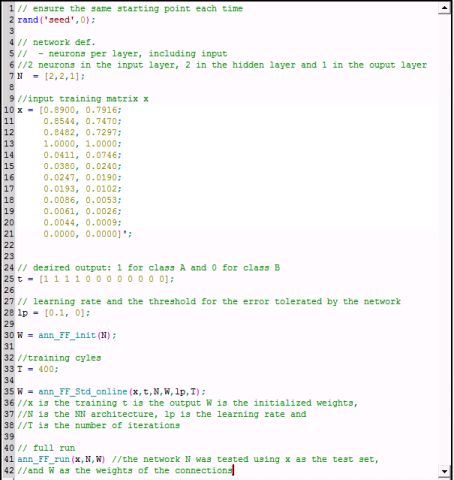 It is obvious from the results shown that as the learning rate is increased, the more closer the obtained values for the output are. Also, increasing the number of training cycles results to values for the output that are closer to the desired ones. It turns out that the predictions neural network made are 100% accurate. Using ANN toolbox in classification is easier compared to using LDA for many reasons.